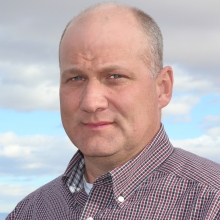 Dr. Bohnert is a Ruminant Nutritionist and Extension Beef Cattle Specialist with Oregon State University stationed at the Eastern Oregon Agriculture Research Center in Burns, OR.  His research is focused on nutritional management strategies to improve the sustainability of beef production in the Intermountain West.  In addition, he is involved with research focused on livestock grazing management and livestock/wildlife interactions. Current research includes studies concerning grazing distribution and behavior of beef cows in riparian/forested ecosystems, Interspace/undercanopy foraging patterns of horses in sage-grouse habitat, and timing and intensity of cattle grazing on sagebrush obligate avian habitat.

Beef cattle production is an important segment of Oregon's economy and is a way of life for many Oregonians, especially in the eastern half of the state where approximately 70% of Oregon's 550,000 beef cows are located. In Oregon, sale of cattle and calves generated over $700 million and was the number two agriculture commodity in 2016.

Native flood meadows (about 350,000 acres in eastern Oregon) are traditionally harvested for hay from July to early August, depending on water availability. In addition, cattle are brought to the meadows from summer range in order to wean calves, winter the cow herd, and calve. As a result, beef cattle routinely spend half of the year on native flood meadows grazing residual forage or being fed hay harvested from the meadows. Mature cows often require 1.5 to 2.0 tons of harvested forage during the winter feeding period. The resulting winter feed costs are extensive, often ranging from $150 to 300 per cow per year. These winter feed costs represent a major obstacle to intermountain beef cattle producers and threatens the future of beef production in this area.

Dr. Bohnert's research program is designed to provide management alternatives to Oregon's beef cattle producers that are economically viable while maintaining acceptable levels of production. In addition, his program helps develop tools that can be used in assisting beef producers when developing nutritional management plans.