The Animal and Rangeland Sciences graduate program is designed to provide fundamental training in animal sciences and rangeland and ecology management. After selecting an area of specialization, students are guided by their major professor and advisory committee in designing a program of study to develop the knowledge and skills relevant to the student's career and professional goals. 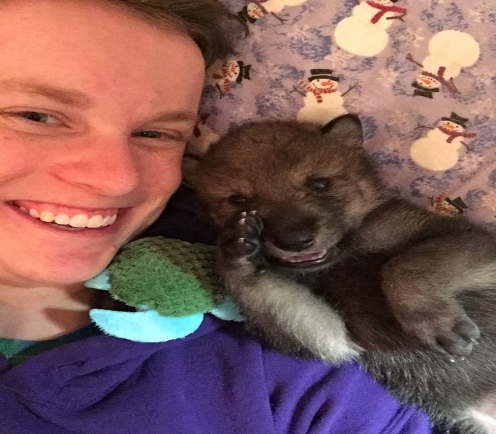 Last year I had the unique opportunity to be a wolf pup parent. I spent several months raising, training, and socializing wolf puppies at Wolf Park in Battle Ground, Indiana. While I was there I also conducted behavioral research with the wolf pups as part of my mentor’s ongoing research. This opportunity came about as a result of an ongoing collaboration between my mentor, Dr. Monique Udell, and Wolf Park since she was a graduate student. She has been involved with numerous behavioral research projects involving the hand-reared wolves at Wolf Park, and she herself has been a wolf pup parent to litters there in the past.

The foundation for this opportunity began during the spring of 2015. As an undergraduate in Animal Sciences at OSU, and a part of Dr. Udell’s Human-Animal Interactions Lab, I was able to travel to Wolf Park along with Lauren Brubaker, a graduate student from the lab, and conduct behavioral research with the adult wolves. This research was later published in Science Advances in 2017. Because of my background as an animal trainer and the connections formed with the wolves and staff during this project, I was recommended to be a wolf pup parent the next time they had a litter of pups.

That opportunity became a reality when a litter of five pups was born on April 8, 2017. Soon thereafter I arrived at Wolf Park and became a part of the team of eight pup parents. We rotated shifts, taking care of the puppies 24/7 for the next several months. Even with eight of us sharing the job, we were sleep deprived for sure!

A key element of our job as puppy parents was to gradually expose the pups to novel stimuli in their environment especially within the first 5 weeks of their lives, during the stage of their life known as the critical period of socialization. Our goal was to systematically introduce them to a huge variety of sounds, smells, sights, movement, and textures throughout their puppyhood so that throughout their lives, other new things wouldn’t seem so unusual or frightening. It was fascinating, exciting, and definitely educational.

Getting to raise and train the wolf puppies, and having the opportunity to also train adult wolves, foxes, coyotes, and bison while at Wolf Park, was an immensely valuable experience, especially in my career aspirations as an animal trainer. I learned more than I ever could have imagined thanks to those wolf puppies! 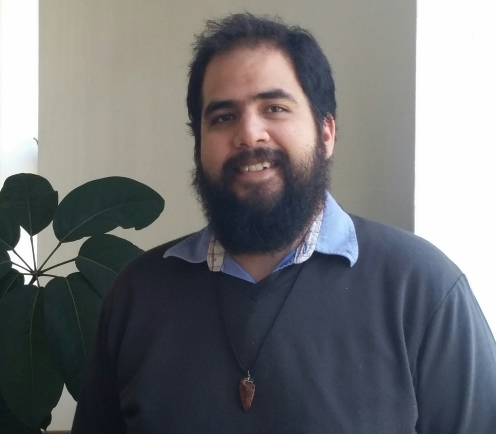 My first involvement in this department was through an internship in the fall of 2014. During that time, I was a master’s student at the Universidad Autónoma de Chihuahua, in Mexico. I was invited to do an internship to enhance the research for the master’s program which focused in the germinative responses of different native plant species from the Chihuahuan desert to simulated rainfall sequences that represent the most common rainfall patterns. Dr. Ricardo Mata-Gonzalez agreed to help with the research and I came to Corvallis work with him the fall of 2014. The research here was conducted at the Oregon State University seed laboratory and greenhouse facilities. I learned how to conduct a tetrazolium (TZ) viability and germination tests on the laboratory. The information obtained from this research was the base for the propagation protocol of the three studied native plants from the Chihuahuan desert. These results were presented at the Society for Range Management 2017 annual meeting in St. George Utah and are being reviewed for publication in the Journal of Arid Land Research.

As a person born and raised in Mexico, my mother language is Spanish. While I was able to read and write in English, I found it difficult to speak and communicate properly. The people here have been supportive, and I have overcome difficulties from the language barrier. I have seen people with bright ideas not trying in places where they could greatly improve, because of the languages barrier. The recommendation that I always make is TRY. No one will never know what could happen unless they try, and I could make it!

After the internship, I wanted to pursue my Ph.D. degree at OSU. I came back in the Fall of 2016, with the help of Dr. Mata-Gonzalez as my major professor. I am studying the relationships of different sagebrush species with soil arbuscular mycorrhizal fungi to improve understanding of the natural symbiosis and facilitate restoration programs for degraded rangelands. I expect to find how to improve the establishment of different species of sagebrush for restoration programs.